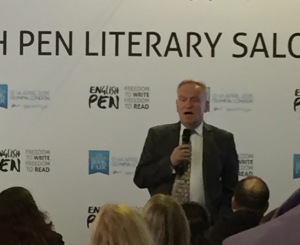 London Book Fair always buzzes with big names and LBF16 was no exception. Meg Rosoff, Deborah Levy and Judith Kerr were all interviewed at the English PEN Literary Salon (a designated area away from the publishers’ stands). Sadly, I missed all of the above but I did manage to catch appearances from other successful writers: Jeffrey, Peter and Jeanette. But can you learn anything useful by listening to a half-hour slot from an established name?

First up, I happened to be sitting in the PEN Literary Salon area (meeting a friend) when who should show up behind a wall of press photographers than Jeffrey Archer in a novelty tie (it may have had books on it, but I wasn’t close enough to see).

Archer is brash (often dismissive of press and underlings) and irrepressible. He talked about book promotion rather than writing, and declared himself a “storyteller” rather than a writer. He produces about 14 drafts of each novel.

Peter James is the antithesis of Archer. Where Archer is loud, larger than life with an ego that fills the room (Olympia), Peter James is quieter, considered and calm. Whether or not this is due to the amount of time he spends with dead bodies I don’t know, but this unassuming man certainly sees the darker side of life firsthand as he often accompanies police on various raids and has lost count of how many autopsies he has attended.

James offered sound advice, saying character is key, followed by research (to ensure accuracy) and finally plot. ‘You’ve got to surprise yourself as a writer or you won’t surprise the reader.’

thoughts on Shakespeare, theatre, and the London he knew – a young city where everything was urgent and people lived life to the full.

Winterson’s latest novel, The Gap of Time, is a reimagining of The Winter’s Tale. ‘I am a foundling,’ Winterson said, ‘it has an abandoned baby at its centre and I used to read it looking for clues.’

She went on to say that there are three available endings: revenge, tragedy and forgiveness, and that as she gets older she is more interested in forgiveness.