Writing and particularly finishing a novel is never easy (not for me, anyway) and I’m always interested in any clues from the greats about how they did it, and that’s one of the reasons I love a literary pilgrimage.

Last summer I ventured further afield, and after the full-on, money-draining, sensory overload that is Disney, Orlando, headed south on a road trip to Ernest Hemingway’s house in Key West. This was the home he shared with his second wife Pauline Pfeiffer. It’s a beautiful French Colonial style mansion full of six-toed cats (descended from Hemingway’s own polydactyl cat, Snow White). The house was a wedding gift from Pauline’s uncle (nice uncle), and it came with a carriage house, the second floor of which became Hemingway’s writing room. 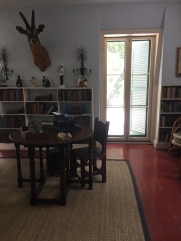 overlooks the pool – originally there was a boxing ring below – Pauline had the pool built at huge expense while Hemingway was away reporting on the Spanish Civil War.

So, what’s to gain from visiting such places? Does it help to see Jane Austen’s tiny writing table (squished next to the window, but far enough from the creaky door to be warned of imminent disruptions), or the Brontes’ front room where the sisters workshopped together?

These houses are usually preserved in a semi-realistic way. I doubt Pauline Pfeiffer lined the walls with framed posters of the film adaptations of Ernest’s books (especially after he went off with Martha Gellhorn), and yet the house does offer a glimpse of a writer’s life: the domestic set-up with kids and pets, and the complications that arose from Hemingway’s appetite for wine, women and macho pursuits. 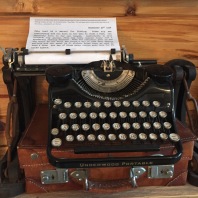 The Key West house was only a small part of his life and yet if offers insights into how he lived and visiting made me want to read more about him. Last summer I was grappling with the umpteenth rewrite of my latest novel, My Life as a Bench, and it helped to read about Hemingway’s perfectionism and

his reluctance to send out his novel A Farewell to Arms until he was entirely happy. He rewrote the ending about seventeen times, and reading this spurred me on to once again revisit the ending of My Life as a Bench. Somehow it helps to know that even the greats have had to struggle to ensure the ending of a novel is right.

A version of this feature was first published on Britfic.com.

2 thoughts on “Hemingway’s House and Rewriting”